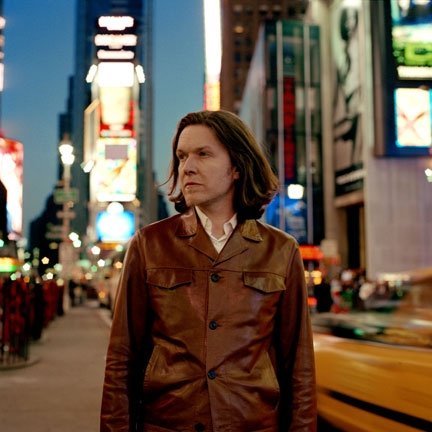 Published first in March 2004 on the Russian version of BBC online at this page.
Translation and transcript by Tuomas, a Sylvian fan from Finland.

Known British musician David Sylvian – the past the vocalist of group Japan, and nowadays – one of the brightest vanguard executors on a modern stage – for the first time will act in Russia. Within the framework of world tour Fire In The Forest it on April, 18 will play a concert in Saint Petersburg, and 19-th – in Moscow. For many years musical career Silvian has let out some very successful solo albums, compositions from which entered into the British charts.It also has written down significant teamwork with such pillars of musical fate-avantgarde, as Robert Fripp (King Krimson) and Holger SHukaj (Can). Before arrival to Moscow David Sylvian has given interview to the correspondent of Russian service BBC Evgenie Kanevskomu.

BBC: David, you have somehow told, that your best works never appeared on singles and did not become the present hits. Why so occurs?
DS: As the author I do not aspire to limit the creativity by the three-minute formula of a single. And as a result the best really does not sound so widely, as some my more popular things.

BBC: Do you agree that rather deep and interesting music can be very popular? Or is it – only for intellectuals and judges?
DS: I Think, that good music can be very popular, yes! When someone composes and executes music, one tries to reach people. But the main thing – in reaching as it is possible a lot of students and thus to not go on the compromise with creativity. It is possible to speak very successfully with huge weight of people with the help of a correct composition. Actually it depends about what you try to reach with this or that work. If you do not go on the compromise with music if work allows to limit itself to the three-minute formula – for example if there is very good melody – that is not present the reasons on which one cannot be popular. But there are also other works which do not get in this category. And if to try to squeeze them there, they become weaker. It will do damage to creativity, and from it will be better to nobody.

BBC: Many years you worked with big musical corporation Virgin Records. Several years ago you have decided to break off with it attitudes, but the company still owns all your records. After such experience – that you would advise young musicians who want to reach something in music, – to work with giants and quickly to receive money and popularity or to expect for the independent companies and to remain free from the very beginning?
DS: It is very rectilinear approach. Now, when the musical industry passes through such significant changes, in it is very difficult to work. in the Beginning it is very difficultly to be heard. It is very uneasy to interest one of the conducting companies in the creativity. And it is very difficult to make that you have heard, if you work through the Internet or with an independent label. On this way – one face continuous difficulties. Therefore everyone should choose itself, in what way to go. If the musician considers, that his creativity is quite accessible, and it is ready to go on the certain compromises to reach a lot of people and to excel, in work with the big companies there is no harm. But if, in his opinion, his creativity is not necessary for such company then there are many other ways. Good news consists that now there are many independent labels, and, certainly, there is an Internet. But also there is a lot of voices, which struggle when heard. You join this chorus and try to outvoice others… Now not the most simple time for musicians.

BBC: If you had to begin now the career, you would agree to work with independent as a label or nevertheless would choose the big company?
DS: It’s not such simple question as such choice depends on a plenty of factors. It would depend on if I would try to create that music in this time interval. If to speak about music which I write now, I think, that I act correctly, creating own label and working basically through the Internet. Now very difficultly in this industry. Also it is necessary to search for a way which suits you. In Japan] there is something very important for me. And something very personal. Probably, I am connected to the Japanese culture much more, than about any another.

BBC: In your life so many things are connected to Japan – as the country and culture. How have begun these mutual relations, and what role this country plays your life now?
DS: All began, when I as teenager have seen a documentary film about a life of Japan, and have very much taken a great interest in this culture. Since then me to it very much pulled. Later my group was a success in Japan and consequently we spent there significant time, giving concerts. In due course me this culture more and more interested, and we became very much close friends with the Japanese musicians and artists. Eventually my love to this country constantly developed, I began to understand it better. It is very different, many-sided country. I think, that last 10 years I carried out there not so much time, as earlier. But somewhere a year I very much would like to return and renew attitudes with this country. Because there is something very important for me. And something very personal. Probably, I am connected to the Japanese culture much more, than about any another.

BBC: Coming back to concerts in Moscow and Saint Petersburg. On your expression, the concerts of Fire In The Forest-tour which begun in 2003, was ” multimedia show ” when on a stage there were only you and your brother Steve Jansen and played an environment of a plenty of computers. In Russia will you use this scheme?
DS: Yes, this is continuation of the same tour. Show is divided into three parts. The first part devoted to new album Blemish, is executed with the help of samplers and laptop, and it is accompanied with the visual images created [by the Japanese artist] Masakatsu Takagi. Then we begin an acoustic part of a concert – the acoustic guitar and electronic perkussion. And in the third part rather new material – it will be executed again on laptop and synthesizers, and again – accompanied by visual images.

BBC: how Strongly you depend on development of technology? If to present, what all modern devices do not exist, you could reach in music what you want?
DS: The Technology is only tools which are spread out before you. And you have the right to use them how you arranges. If you have only an electric or acoustic guitar, certainly it is possible to continue to do music. But there is a desire to create new sound experiences for yourself and for public. Therefore, when the technology promptly develops, me to it pulls, and I try better to understand, on what it is capable and how it can be used in my work. I think, that we can talk in very modern language.For me the main problem of music of last years is concerns structure and the form at creation of popular compositions – that it any more does not challenge to me. As the student and as the author I deserve that to me challenged. But I feel, that language dies. Language of modern music dies. And it is necessary for us to invent it anew. To speak in the modern language which will excite us and to change us how it was once.

BBC: Some people nevertheless consider, that new technologies have spoiled music as musicians search for new effects and sounds, but do not worry about music as such. You agree with it?
DS: I disagree. It depends on how to define music. Now very actively there is a development of new sounds if want, musical collages. It is one more form of creating music. And in this genre is a lot of interesting.But, probably, it now it is too much. Here than usually endow, so it is the emotional maintenance which, certainly, is very important in music. When the intellectual party takes top above heart in creativity then, I think, problems begin. But if to find balance between intelligence and heart music remains strong and exciting. I think, that it is very important. The form continues to develop promptly, and I am simply very tired from music which I hear. It does not excite me because it’s too familiar to me. People work within the framework of genres and styles which for a long time are known for all. And it is not enough of it to speak about modern emotions and problems. And in fact it is one of the purposes of music, and art as a whole, – to change us through interaction with itself. Therefore people which can speak on truthful, the modern language are necessary.

BBC: Last question – about Russia. If you recollect this country, what first will come to you in a head?
DS: Probably, the first what I shall recollect, – about Andrey Tarkovsky’s great films. Probably, they were for me a window in the Russian culture. Yes, I shall recollect them, when will go speech about Russia. And verses of his father which appear in these tapes, is very touchingly.