Home Articles and Interviews Transcripts The Artist Breaks His Silence (Only Music, June 1987)

The Artist Breaks His Silence (Only Music, June 1987) 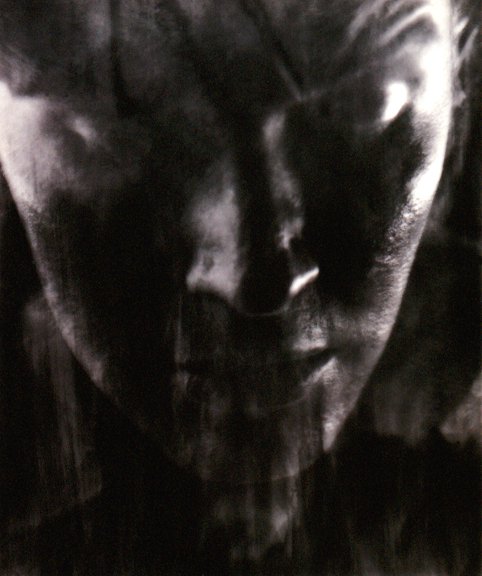 The former glamour boy of Japan has changed his look and emerged from his musical exile.

If you were to meet David Sylvian on the streets these days, you might find it a bit difficult to recognize him. This new persona hasn’t much in common with the one that made him famous back in the days of his former group, Japan. His hair has returned to its natural shade of brown with a bit of auburn, and the peroxide is a thing of the past. The face that was once intricately made up, helping him to be tagged ‘the most beautiful man in the world,’ is now completely void of any and all war paint. The only thing not deleted from his old look are the tortoise shell glasses perched leisurely on his nose. The bulk of his mannerisms have stayed the same, his quiet demeanour and insightful manner of speaking being the most obvious. But it is quite safe to say – David Sylvian is a changed man.

Sitting on the floor of a room at the Blake Hotel in London, Sylvian is calm and eloquent. Where three years ago he was considered a poser, today the public is regarding him in a different light – as a serious and talented musician. Of course, the image change has had a great deal to do with the public’s altered attitudes toward him, but even more of that transition was accomplished with the release of his first solo offering, Brilliant Trees.

The record was extremely different from what anyone could have expected. Instead of making a clone of Japan’s highly successful Tin Drum LP, Sylvian created an extremely ethereal, complex collection of songs that went a step beyond what he had done with his old band. That’s not to say that Japan was simplistic – it obviously wasn’t. It’s just that Brilliant Trees was one of the most complete, intelligent albums to be made by a pop star in years. And without doubt, Sylvian had been a pop star.

Such was an area of enormous dismay for him, hence the aforementioned image change. He explains, taking a long, full drag off of a Gitanes, “Brilliant Trees was about the time when I started changing my looks. The image was going gradually – first the hair grew out, then I stopped using the make-up. I was tired of being recognized and part of the reason for my change of looks was so I wouldn’t be stopped in the streets anymore.”

It has been documented for years that Sylvian was never a fan of the public attention he received. He continues, “I was never comfortable being recognized and I hated the idea of fans standing outside the apartment and having to move every so often; having to change the telephone number so many times. I couldn’t cope with it, and as I love walking – anywhere – it relaxes and inspires me and life is so much easier without being recognized. I wasn’t thinking much about it – it was more of a natural process and an image wasn’t of any importance anymore. The image is important when you are a pop person, a star. Other- wise it has no meaning, it is useless.”

Sylvian’s secrecy concerning his private life has always been fairly apparent. It is only now, however, that he has garnered enough respect from the press that he isn’t constantly badgered about granting interviews and the like. It is the way he likes things to be, stating that, “You only need to do interviews when you have something to promote. I don’t think you should be very exposed. “

After the proper public persona was established and Brilliant Trees was released, Sylvian began work collaborating with several Japanese film producers, the end result being the half-hour video, Steel Cathedrals. The music accompanying the footage is all instrumental, as was his second solo release, an EP titled Words With The Shaman. His affinity for instrumentals could easily be considered puzzling with regard to the fact that many view his voice as near-perfect. “I find instrumentals rather intriguing to do,” he explains somewhat matter-of-factly. “They are so enjoyable as the kind of technique is so different.”

An album consisting of music from Steel Cathedrals and Words With The Shaman was released as a cassette-only limited edition package shortly after their initial releases. Alchemy – An Index of Possibilities, when combined with Brilliant Trees, serves as a sampling of things to come for Sylvian’s third album, Gone To Earth, which has just been released in the United States by Virgin America.

The album is a definite accomplishment, made up in equal increments of instrumental and vocal tracks. Through its swirling melodies and hauntingly beautiful imagery, Gone To Earth exists as an aural documentation of the mentalities within Sylvian himself. It is one of the few vinyl offerings available in which the listener is pulled into the spirit of the music – enveloped, if you will. It seems as though, for the first time, David Sylvian is saying what he really means, which these days normally centres around his obvious love of life. “Whatever circumstances, that love is what leads me through life,” he agrees. “It’s only lately that I’ve started to understand things on a larger scale, and that certainly applies.”

Indeed, Gone To Earth is a personal statement. However, when such is the case, the public often finds the material too personal; not really hitting the listener on the level of which it was intended. Sylvian explains that, although such is a valid point, it doesn’t really concern him. “It’s obvious you want to communicate; you want people to hear the music, otherwise there is no reason for making it. But the commercial aspect is not something I often think about. Working on my own, it’s very difficult to be satisfied with the music I make as time is needed before I can really assess the value of what I’ve done.”

Still, with the release of the LP in Britain late last year, Sylvian was less than enthusiastic about going out and taking the necessary steps of promotion to ensure its success. Hence, “Taking The Veil,” the album’s first single, made a less than favourable show on the singles charts. Yet he remains undaunted. “The record company decided to issue it (‘Taking The Veil’) as a single, although I didn’t think it had such potential,” he says, pausing to take a sip of his tea. “The song I consider as the right choice they haven’t even scheduled as a future single. My favourite for a 45 is ‘Riverman.’ I never pushed for a single once, but I felt ‘Ghosts’ [Japan’s best selling single] was to be one and I was dead right.” Of his failure to promote the single, he simply retorts, “I don’t promote the singles – there wasn’t even a video for it (‘Taking The Veil).”

Regardless of sales figures, Gone To Earth is a major accomplishment if for no other reason than the host of musicians involved with the project. Among others, Robert Fripp, Bill Nelson, and Sylvian’s brother and former Japan drummer, Steve Jansen, all make their contributions to the LPs four sides. “I choose them very carefully,” says Sylvian grinning, “and I’m proud to say that everybody I’ve ever asked to work with me has agreed. Some of them I’ve known before, like Bill Nelson. Some I’ve gotten to know since, like Robert Fripp.”

While Sylvian had extremely concrete ideas of what he wanted the album to sound like, all of the guest musicians played important roles in its final, complete sound. “As they are all people I admire for their playing,” he explains, “there was no reason to guide them. If they ever got stuck, I’d explain the feeling I was looking for and they’d pick it up immediately.”

That feeling is best exemplified on the album’s instrumental tracks. According to Sylvian, those compositions reflect more to the listener than do the vocal tracks. “It is environmental and it is not to be listened to but instead it is to be used. They (the compositions) are all musical landscapes, either real or imaginary. The vocals work on a different level, like something that is complete – there isn’t a lot you can do with it except just listen.”

While his solo work has been extremely impressive and, as an artist, he has grown tremendously, there still remains the immortal question – will Japan ever get back together?

Sylvian’s answer, while not really giving anyone too much hope for the possibility of such an occurrence, does sum up his current situation rather nicely. “Richard Barbieri played on some tracks for this album, and I’ve just worked with Mick Karn on his new album (Dreams Of Reason Produce Monsters). I sang a couple of songs and Steve played the drums. The reunion…l don’t know how we could work after all this time but it would be very interesting to see what we’d come up with. Yet I don’t see it happening. With all of the people I’ve mentioned, there is a whole index of possibilities for me.”