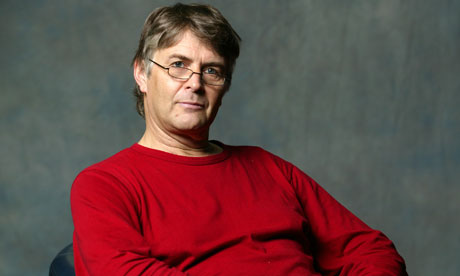 Originally published on theartdesk.com, but the article is not active anymore.

At first sight the cover of David Sylvian’s new record looks like a sly, camp joke on its elusive creator. Peeking dimly out of a clump of gnarly green tree trunks stands a small solitary deer, its pointy ears silhouetted against pale distant sunlight. As an image of a musician who has spent most of the past 30 years working in deep seclusion – to the point where the majority of his fans have little idea where he lives and only a vague idea of what he nowadays looks like this is Sylvian in excelsis.

He remains one of the great originals of British avant-garde pop. David Sylvian is the man from the glam-rock band Japan who long since fled the scene of his carefully contrived Di-haired blond celebrity, and retreated into a shadowy sound world of his own devising. With his languorous, textured tenor flirting ever more distantly with the ballads that once made him famous, he now deals in songs that handle introspective thoughts and emotions with a fastidious, painterly restraint. Like Scott Walker, another golden-voiced renegade on the run from pop glibness, Sylvian went thataway and never returned. The wonder is that his unique brand of jazz-inflected “art rock” has never ceased to enthrall a small but dedicated international audience. On his increasingly rare visits to Britain, where he has not lived since the 1980s, Sylvian can still sell out medium-sized theatres in a heartbeat.

For all his obstinate individuality, he has recently become an adept virtual networker, practised at assembling clubby ad-hoc ensembles with likeminded improv artists (Evan Parker, Keith Rowe), laptop pioneers (Christian Fennesz), slightly mad DJs such as the Japanese turntablist Otomo Yoshihide and electronic noodlers from the Polwechsel collective. On Manafon, Sylvian presides like an absent-minded conductor over a kind of modern chamber music. The album unfolds as a series of melodically skeletal poems and monologues, fashioned in sessions in London, Vienna and Tokyo and completed in his studio in the backwoods of New Hampshire – his home for most of this century following the break-up of his marriage to the Amerindian poet Ingrid Chavez.

The beauty of Manafon, for those who are prepared to sit still for it, lies in the hypnotic interaction between Sylvians gorgeous, groany voice and the enigmatic sound collisions he sets around it. Doors open and close, admitting half-heard conversations; machines whirr and hiss, acoustic guitars strike up and then shut up again, saxes wander to and fro. A perky Greek chorus throws in its ten-pennorth. As a prospectus, this may sound like arty pretention gone AWOL, but in the event and this album is definitely that – Sylvian is too old a hand at manipulating suspense to let the listener off the hook. Few records are imbued with such a vivid sense of music at the point of birth, rather than after. And boy, does it feel good not to have an automatic rhythmic pulse interrupting the charmingly indeterminate flow.

Abstraction doesnt have it all its own way. Sylvian may not be the worlds greatest storyteller, but theres a lot more point and poignancy to his utterances here than he managed back in the day when he used to intone and worry, sphinx-like, about beehives and Buddhist surrender. At the age of 51, this son of a plasterer from Beckenham seems now to be reflecting on British spirituality in various forms, and in particular that of the Welsh poet R S Thomas, sometime vicar of the parish of Manafon. Thomas has obviously got to Sylvian in ways which suggest that he has at last found the soulmate, or intellectual role model maybe, who has eluded him in the past.

Ever since he fell out with Japans Mick Karn in 1982 over an oriental girlfriend, Sylvian has struggled to find a home for his monkish yearnings and deeply recessed emotions. A dead poet may not be everybodys idea of the way forward, but for a man obsessed with “ghosts” as Sylvian has always been remember the song that launched his solo career? Thomas may be just the ticket. Sylvian has described Thomas as a man who struggles with the silence that burns inside his own heart and mind. Gods silence. Hes a man out of time an insufferable individual in many ways with a quixotic element in his quest for knowledge. To which you would have to say, “Not very rock and roll, but very David Sylvian.” And for as long as it keeps the old goat, deer or whatever as frisky and urgent as he sounds on Manafon, more power to him.