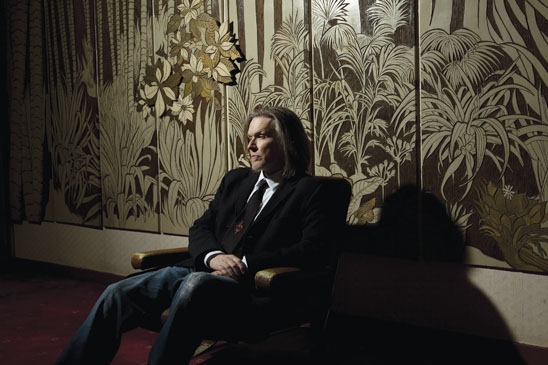 Interview on Swedish by LARS YNGVES online magazine Nya Upplagan.
i have tried to make the Google translation as accurate as possible. Suggestions are welcome.

David Sylvian Japan started the group who had some big hits in the 80s and is also influenced by Eastern philosophy. He recently completed work on his upcoming compilation CD Sleep Walkers, which contains the music that he made together with other artists, fresh remixes and a song with composer Dai Fujikura.

LY: You’re not very fond of that seen in the media and is economical with his touring. Is it difficult to avoid publicity when you’re an artist?
DS: On the one hand, it is impossible to escape the public domain, as you would like to tell the world about what you do, so a certain amount of publicity is probably inevitable. But on the other hand, it is becoming more common with communication via electronic media, and then you can keep yourself in the background while they are doing what you need, as publicity and marketing. It is a development that fits many artists, including myself.

LY: You seem to live a secluded life?
DS: Yes I do. When I moved to the U.S. so I noticed that we, as a growing family, came more and more outside the loop. We started in the cities and traveled around. We moved from the middle to the U.S. west coast and eventually to the east, and we became more and more isolated. In the beginning we were never far from any big city that we could not get our cultural needs satisfied, but over time has decreased and the needs we have become more isolated. Internet became a way of keeping in touch with the outside world. The idea of belonging to the culture that exists where you live is not true anymore. Now we are largely global citizens who embrace various aspects of culture and news from around the world. I work with people who live scattered all over the place. We’re talking to each other through electronic media and send files to each other in much the same way as when we sat and worked together. This flexibility, immediacy and accessibility of our interaction is something that will only increase with time and that there will be new, even better techniques.

LY: Are you such as going to football game?
DS: No, never. I suppose I am totally uninterested in sports. Though it is clear, my daughter started with basketball last semester and I was totally captivated by her to see the matches.

LY: Many think that your music is very bleak, though I think quite simply that it is beautiful. Are you melancholic to your orientation?
DS: I never liked the term “melancholy”. Some may well call me that, but they might have been surprised if they knew how easy I have to laugh. And how much by the interaction with my children based on humor, and so on. I have no hard mood swings, but there are some brighter sides of me, and it keeps me more on my own.

LY: I get the impression that you like to be alone and think and try to learn more about yourself. Am I wrong?
DS: It is true that I spend a lot of time to myself. For the most part it is a welcome solitude, but sometimes it may be too intense and when I feel lonely. It is important to have a healthy body and healthy mind. I really appreciate being with people I like, but my ability to socialize with others is limited. It is said that there are two kinds of people: those who charge their internal batteries by being with others and those that charge the batteries by being alone. I belong to the second group. If I have a stressful day may suffice that I may be fourth in private for me to cope with the rest of the day.

LY: What makes you laugh?
DS: It’s probably the British self-underestimation of humor. Quick replies. Puns. Being with my daughters.

LY: What inspires you? Japan had hit singles, do not you miss the successes?
DS: Are the charts still? I do not track of them, unfortunately. If I do not have to be on the charts? Not at all. I am inspired by many different things, but most of my own life experiences, my mental and emotional life, and perhaps also a few artists. What makes a work authentic is its emotional and philosophical truth. Therefore, there must have been inspired by the culturally melted and processed so that you can not see its influence in what you’ve done, it has become part of one’s own vocabulary.

LY: Sorts you out some music that you get ideas? For example, if you have a real hit in the head, would you make a song of it, or you can blur out the inspiration?
DS: No, that’s not how it works. When I write music, I have a goal that I move on. The chances that I would be knocked by an idea for a hit single is not exactly great. But it depends of course on the project as a whole and on who I work with. In general, I believe that the hit singles (are they still?) And successes in the chart (I’ll trust you that they still exist) is for a younger generation. It is their turf.

LY: What is so exciting with improvised music?
DS: I’ve been listening to improvised music for decades. In the beginning there was the feeling that total to go up in it and try to understand, music that was almost entirely divorced from my own. But over time I started to become curious as to whether I myself could venture on the type of music, and do it well enough. It took perhaps twenty years before I realized that it could be possible. It was attracted by the freedom of life as a composer offered.

LY: What is the meaning of the word Manafon?
DS: I came across the word when I read about the poet and clergyman RS, Thomas’s life and work. Manafon (a small village in Wales) was his first parish in which he also wrote his first three poetry books. Eventually the word a meaning of the poetic imagination, the creative mind or the origin. That is why the cover of the CD Manafon shows an almost surreal idyll, a place where intuition is in contact with the subconscious.

LY: You have worked with other artists over the years. If I suggested to you, David Bowie and Bryan Ferry should do something together, what would you say then?
DS: If I work with others as it is to reach a specific target, or it is the formulation which requires a special vote (it may be the trumpet, guitar or whatever) and I do what is necessary. It is as a person always subordinate to the composition. It is a fairly simple process. I have not, and never had, a list of artists that I would like to work with.

LY: Do you listen to David Bowie and Bryan Ferry, and what do you think so, for them today?
DS: It is actually less than ten years ago I heard one of them. Maybe I should change it?

LY: You have worked with Stina Nordenstam. Do you keep in touch with her?
DS: Not so much that I would like. She is incredibly talented and a wonderful person. I really liked working with her.

LY: Do you plan any new cooperation agreement with her?
DS: Not at this time.

LY: Can you give some examples of how eastern culture has influenced you as a person?
DS: What I have been influenced by, I took to me altogether, and assimilated with myself. So it’s hard for me to see how much my interest in oriental culture has influenced me. I could point to Zen Buddhism and, to a lesser extent, shintoismen. The two directions has guided me in my personal development. The wonderful creation that is popular culture and its own personality variability. Accepting both its male and female characteristics, without conflict.

Since I have developed friendships with Japanese artists, musicians and composers. They all have a special place in my heart. Musicians and colleagues as Ryuichi Sakamoto, Toru Takemitsu, Otomo Yoshihide, Nakamura Toshimaru and, more recently, Dai Fujikura. Visual artists who Shinro Ohtake, Shinya Fujiwara and Atushi Fukui. I found an aesthetic that I recognized myself in, in many of their works, especially in Ryuchi. I found a community of my contemporaries in Japan who I had not done in my country.

LY: Do you believe in spirituality and religion?
DS: I have a strong anti-religious features, and it’s probably because I live in the U.S. where religion often plays a large role in people’s moral lives, regardless of faith or personal beliefs they have. I am very suspicious of all institutions, but especially religious. Spirituality need not in itself have much of organized religion to do. It is increasingly difficult to talk about spirituality, to the language, which has always been a bit misleading, is impoverished and there are a lot of unhappy associations in circulation. We really need a new terminology, so that we can discuss what it really is. We are spirit, just as much or even more than meat, blood, brain, and more. It is our true nature. We can channel it, or come into contact with it in a variety of ways. Some think it’s best to work with or through organized religion. Others may find it in proximity to nature and some of his creativity is inextricably linked with the spiritual. The different paths that lead to our own spirituality, which may be the flower, are innumerable.

LY: Do you write any new music at the moment?
DS: I’m into something that could be called an orchestral version of Manafon.

LY: When are you coming and play in Sweden?
DS: Then I must first determine whether I can choose to tour now, and I have not done yet.